The $600 million project will create the tallest buildings in the county. The company promises 500 full-time jobs.

CHARLOTTE COUNTY — The only thing missing at the groundbreaking for Allegiant Travel Co.’s $600 million Sunseeker Resort was the sun.

Under a light mist Wednesday morning, company and county officials dug ceremonial golden shovels in the sandy soil along Charlotte Harbor to signal the start of construction on the company’s first full-service resort.

Phase 1 of the project is expected to add 510 resort hotel rooms and 180 one-, two- and three-bedroom extended stay units in three nine-story waterfront towers. Sunseeker Resort will also feature 17 restaurants, bars and cafes and a harbor walk along the 22-acre property.

“It’s not only Charlotte Harbor but it’s the entire community that’s going to benefit from this,” said County Commission Chairman Ken Doherty, noting that a redevelopment district paved the way in 2005 for a project of this scope and size. 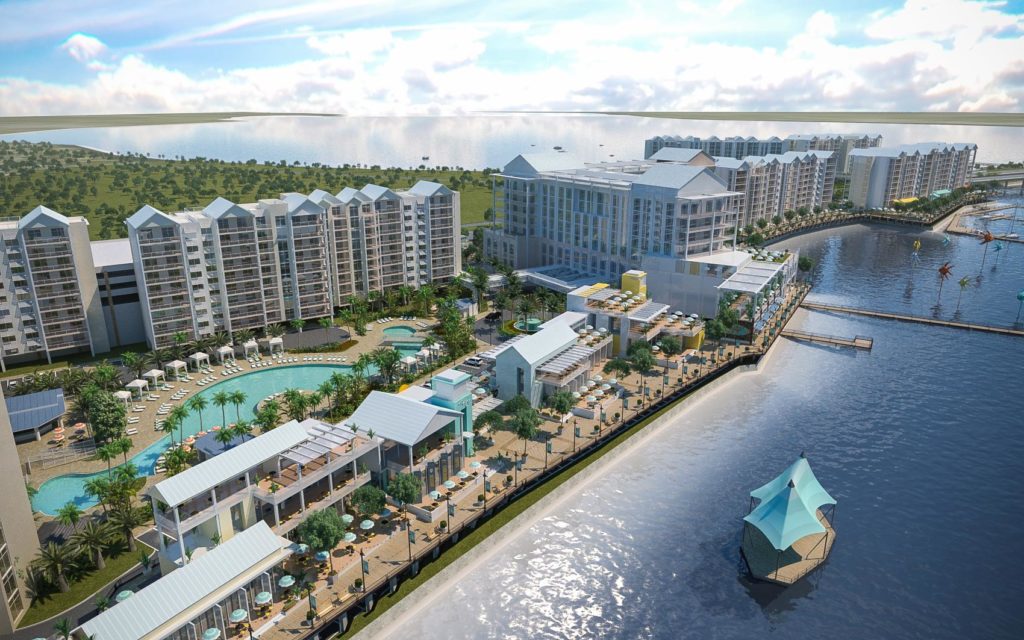 Sunseeker will have the tallest buildings in the county and will tower over the mostly residential and business area on both sides of U.S. 41 near the foot of the Punta Gorda bridge. The resort will dramatically alter the skyline along the Port Charlotte side of the harbor, which is a nationally protected estuary.

Allegiant promised to bring 500 full-time jobs once Sunseeker opens in the fall of 2020, mostly in the hospitality industry and service sector to staff the restaurants, hotels and retail development along the waterfront. Company officials said they are working with area schools and colleges to fill a demand for workers.

Allegiant Airlines’ investment in Charlotte County has already paid huge dividends, as the airline’s expanding operations allowed the Punta Gorda Airport to set a traffic record of 1.58 million passengers in 2018.

The airline began flying into Charlotte County in 2009 and now flies 45 routes annually in and out of the airport 15 minutes from the resort.

“It’s a big step, but the investment is going to be worth it,” John Redmond, Allegiant Travel president, said at the groundbreaking.

Charlotte County continues to grow, albeit a little slower than neighboring Sarasota County to the north and Lee County to the south. The county’s population grew 13.8 percent to 182,000 in 2017, up from 160,000 in 2010, according to Census Bureau estimates.

Company officials said they were faced with a lack of familiarity with the Charlotte County area when they searched for funding, getting some familiar questions: Punta Where? Port What?

“It’s part of the DNA of what we do,” said Redmond, who is a former MGM Grand official. “We have never done the obvious in our history. That’s what makes us so successful. This will be the most successful non-gaming hotel anywhere.”

Initially, Sunseeker was announced as 720 condominiums and a smaller 75-room hotel but Allegiant officials changed the mix of the project to hotel and long-term rentals after researching the market, according to a Herald-Tribune report in October 2018. A proposed 1,000-foot-long resort pool is on hold, and three acres adjacent to Sunseeker may be developed in future stages.

The waterfront hotel rooms are expected to start at $175 a night, with “Sunsuites” renting from $249 to $499 a night, according to a kiosk in the resort’s new welcome center along U.S. 41.

The Sunseeker development is less than a mile from downtown Punta Gorda, which has experienced a revival in recent years by adding several full-service hotels and numerous restaurants and bars in the waterfront city.

The city of Punta Gorda has rebounded beautifully after being decimated by Category 4 Hurricane Charley in August 2004. The city also hopes to be a partner with the resort, providing amenities and attractions for Sunseeker’s guests.

“I think this is a wonderful addition to Charlotte County,” said Patti Allen, general manager of Fishermen’s Village across the harbor in Punta Gorda. “I believe that it’s really going to put Punta Gorda and Port Charlotte on the map.”